The use of e-cigarettes in the workplace 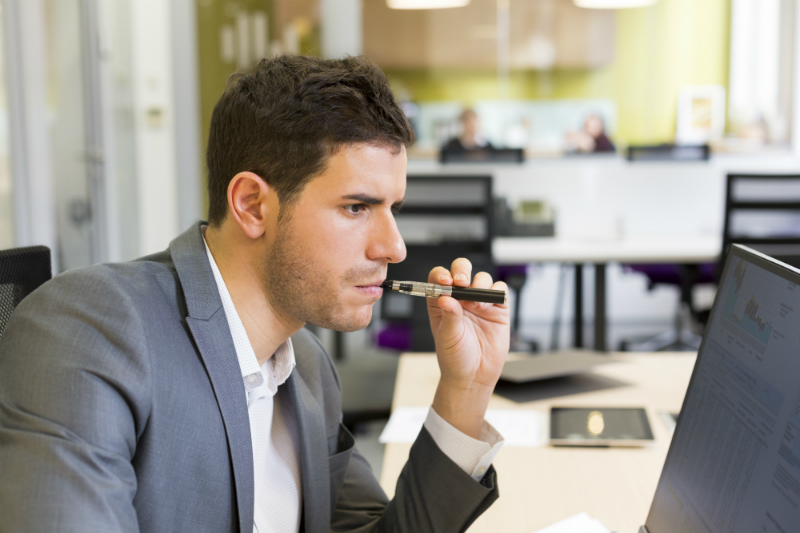 Public Health England (PHE) wants to see a tobacco-free generation by 2025. Despite a continuing decline in smoking rates, nearly 1 in 5 adults still smoke and there are around 90,000 regular smokers aged between 11 and 15

The use of e-cigarettes splits the opinions of many people as the research furthers our understanding of their benefits and how they impact us.

The question is should they be treated the same way as a cigarette and be subject to smokefree legislation, or even have legislation of their own?

To find this out we have looked into e-cigarettes and in particular found out more about the considerations you should think about in the workplace.

What Exactly is an E-cigarette?

E-cigarettes, personal vaporizers (PVs), and electronic nicotine delivery systems (ENDS) are battery operated devices that mimic tobacco smoking and are often used as a replacement for cigarettes. They produce a vapour, including flavoured aromas either with or without nicotine, rather than traditional smoke.

Employers should decide whether to allow employees to smoke e-cigarettes, and similar products, in the workplace or ban them as they would ordinary smoking implements.

What do UK Jurisdictions Say About E-cigarettes?

Even though there is currently no official legislation in place in regards to public vaping, UK jurisdictions have expressed how they will approach it:

What Should Employers Consider before Introducing an E-cigarette Policy?

Electronic cigarettes are not the same as cigarettes, which burn tobacco. It is important to remember that, despite sometimes resembling cigarettes and often, but not always, containing nicotine, they are not cigarettes in anything but name.

Public Health England have undertaken many studies on the potential harm from second-hand vapour and have concluded that there is no scientific evidence that identifies harm from indirect exposure to electronic cigarettes.

Even though e-cigarettes don’t produce tobacco, the physical appearance of them can have an impact on younger people who may mistakenly believe it is normal activity for adults and influence them to smoke.

It is not just the product itself you need to think about, but also the risk of fire caused by the rechargeable batteries. The Chief Fire Officers Association have noted a problem with fires caused by products and they advise that if you are concerned by the unauthorised use of any charging device then do not allow them in the workplace.

Use of e-cigarettes have been shown to be more effective at getting people to quit smoking than any other nicotine replacement. Data from 2015 ASH Smokefree Britain survey indicates that around 40% of users have already quit smoking and most of the rest are either trying to quit or trying to reduce the amount they smoke

Should you allow the use of E-cigarettes at work?

Rules and Policies for Smoking E-cigarettes in the Workplace

If you do decide to implement any rules associated with smoking e-cigarettes then you need to ensure that these are clear to all your employees and visitors.

If you already have a policy on smoking or drugs and alcohol then they could include a paragraph about e-cigarettes in there.

When introducing new rules, employers should first consult with any recognised union or elected representatives, and they should speak with all employees to make sure they understand what the new rules mean and that they apply to them.

Employers may want to put up signs or notices in the workplace which make it clear where smoking is allowed (if this is the case) and where it is banned. These should include rules for cigarette smokers and rules for e-cigarette smokers.

The choice is yours…..

Based on the facts about electronic cigarettes the choice is entirely yours as to whether you should have regulations about their use in the workplace.

Sureteam is an experienced team of health and safety consultants based in Tetbury, Gloucestershire providing a comprehensive range of advice and training to businesses across the south west, wider UK and internationally.

We use cookies on our website to give you the most relevant experience by remembering your preferences and repeat visits. By clicking “Accept All”, you consent to the use of ALL the cookies. However, you may visit "Cookie Settings" to provide a controlled consent.
Cookie SettingsAccept All
Manage consent

This website uses cookies to improve your experience while you navigate through the website. Out of these, the cookies that are categorized as necessary are stored on your browser as they are essential for the working of basic functionalities of the website. We also use third-party cookies that help us analyze and understand how you use this website. These cookies will be stored in your browser only with your consent. You also have the option to opt-out of these cookies. But opting out of some of these cookies may affect your browsing experience.
Necessary Always Enabled
Necessary cookies are absolutely essential for the website to function properly. These cookies ensure basic functionalities and security features of the website, anonymously.
Functional
Functional cookies help to perform certain functionalities like sharing the content of the website on social media platforms, collect feedbacks, and other third-party features.
Performance
Performance cookies are used to understand and analyze the key performance indexes of the website which helps in delivering a better user experience for the visitors.
Analytics
Analytical cookies are used to understand how visitors interact with the website. These cookies help provide information on metrics the number of visitors, bounce rate, traffic source, etc.
Advertisement
Advertisement cookies are used to provide visitors with relevant ads and marketing campaigns. These cookies track visitors across websites and collect information to provide customized ads.
Others
Other uncategorized cookies are those that are being analyzed and have not been classified into a category as yet.
SAVE & ACCEPT